1. Which of the following is not used for detection in GC?

2. Which of these effects result from slow injection of a large sample volume?

3. The GC trace obtained after an experiment is called a

4. Which of the following detectors give concentration-dependent signals?

D. All of these

5. What useful information can be found from a Van Deemter plot?

A. The selectivity factor

6. What is the typical internal diameter of fused silica capillary columns?

7. Resolution is proportional to the

A. number of theoretical plates in a column

B. square root of the number of theoretical plates in a column

C. square of the number of theoretical plates in a column

D. cube root of the number of theoretical plates in a column

8. Derivatisation of a sample is carried out to

A. reduce polarity of the analytes

B. increase the detector response

C. increase volatility of the analytes

D. all of the above

9. Which of the statements is correct?

A. Gas chromatography is used to analyse gases

B. Gas chromatography is used to analyse solids

A. compounds trapped on one column are eluted to another column

B. one column is removed and replaced by another

C. the flow to the column is switched on and off repeatedly

D. any of the above

11. A retention gap is placed between the injector and the front of the column to

A. retain contaminants and prevent them from reaching the column

B. retain the sample and release it gradually to the column

D. all of the above

12. Which of the following detectors give mass flow-dependent signals?

13. Headspace analysis is carried out in order to

A. analyse volatile compounds from solid or liquid samples

B. determine the psychological state of the tutor

C. analyse the column contents ahead of the sample

14. Split injection is carried out by

A. splitting the sample into smaller portions to inject sequentially

B. splitting the sample into smaller portions to inject at the same time through parallel ports

C. splitting off some of the sample so that it does not enter the column

D. none of the above

16. Theoretical plates are used to

A. estimate the efficiency of a column

B. determine the thickness of the stationary phase

C. measure the distribution of the analyte between mobile and stationary phases

D. None of the above

17. What does the selectivity factor describe?

A. The proportional difference in widths of two chromatographic peaks

B. The maximum number of different species which a column can separate simultaneously

D. None of the above

18. Helium is generally preferred as carrier gas over nitrogen and hydrogen because

A. it is inert

B. it has a lower viscosity

C. it doubles up as a party gas for balloons and funny voices

D. all of above

20. What are the benefits of decreasing the column internal diameter?

21. Sample retention in the column is measured by

D. all of these

A. elution of the analyte is extended over time

B. the column is cracked and stationary phase leaks out

C. traces of the stationary phase are eluted

D. the column breaks during installation and causes personal injury

23. Which of the following are not used as stationary phases in a GC column?

D. None are used as stationary phases

24. Doubling the column’s length increases resolution by a factor of

25. Sample injection is considered successful if

A. all of the sample in the injector has been added to the column

B. the sample is concentrated at the start of the column

C. the sample is spread evenly along the column

D. the sample is homogenously spread along the column

26. Which of the following gases is unsuitable for use as a GC carrier gas? 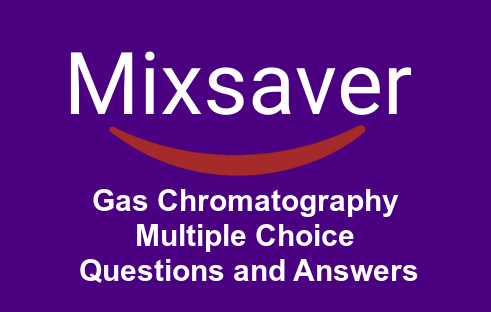