A compiler is a program that reads a program written in one language –the source language and translates it into an equivalent program in another language-the target language. The compiler reports to its user the presence of errors in the source program.

2. What are the two parts of a compilation? Explain briefly.

Analysis and Synthesis are the two parts of compilation.

4. Depict diagrammatically how a language is processed.

5. What is linear analysis?

Linear analysis is one in which the stream of characters making up the source program is read from left to right and grouped into tokens that are sequences of characters having a collective meaning.

The following are the various phases of a compiler:

7. What are the classifications of a compiler?

Compilers are classified as:

9. Mention some of the cousins of a compiler.

Cousins of the compiler are:

10. List the phases that constitute the front end of a compiler.

The front end consists of those phases or parts of phases that depend primarily on the source language and are largely independent of the target machine. These include

A certain amount of code optimization can be done by the front end as well. Also includes error handling that goes along with each of these phases.

11. Mention the back-end phases of a compiler.

Largely they are oriented around a particular model of languages , and they are suitable for generating compilers of languages similar model.

The following is a list of some compiler construction tools:

16. Write a regular expression for an identifier.

An identifier is defined as a letter followed by zero or more letters or digits.

The regular expression for an identifier is given as

18. What is the function of a hierarchical analysis?

Hierarchical analysis is one in which the tokens are grouped hierarchically into nested collections with collective meaning.

19. What does a semantic analysis do?

Semantic analysis is one in which certain checks are performed to ensure that components of a program fit together meaningfully.

20. List the various error recovery strategies for a lexical analysis.

21. Explain parser.
Hierarchical analysis is one in which the tokens are grouped hierarchically into nested collections with collective meaning.

Production rules are given in the following form

25. Briefly explain the concept of derivation.
Derivation from S means generation of string w from S. For constructing derivation two things are important.

i) Choice of non terminal from several others.

Instead of choosing the arbitrary non terminal one can choose

i) either leftmost derivation – leftmost non terminal in a sentinel form

26. Define ambiguous grammar.
A grammar G is said to be ambiguous if it generates more than one parse tree for some sentence of language L(G).

i.e. both leftmost and rightmost derivations are same for the given sentence.

1. No production on the right side is ε.

2. There should not be any production rule possessing two adjacent non terminals at the right hand side.

28. List the properties of LR parser.
1. LR parsers can be constructed to recognize most of the programming languages for which the context free grammar can be written.

29. Mention the types of LR parser.

1. Place $ in FOLLOW(S),where S is the start symbol and $ is the input right endmarker.

2. If there is a production A → αBβ, then everything in FIRST(β) except for ε is placed in FOLLOW(B).

32. List the advantages and disadvantages of operator precedence parsing.
Advantages

This typeof parsing is simple to implement.

2. This kind of parsing is applicable to only small class of grammars.

33. What is dangling else problem?
Ambiguity can be eliminated by means of dangling-else grammar which is show below:

stmt → if expr then stmt

| if expr then stmt else stmt

34. Write short notes on YACC.
YACC is an automatic tool for generating the parser program.

YACC stands for Yet Another Compiler Compiler which is basically the utility available from UNIX.

It can report conflict or ambiguities in the form of error messages.

If w is a sentence of the grammar at hand, then w = γn, where γn is the nth right-sentential form of some as yet unknown rightmost derivation

36. Define LR(0) items.
An LR(0) item of a grammar G is a production of G with a dot at some position of the right side. Thus, production A → XYZ yields the four items

38. Explain handle.
A handle of a string is a substring that matches the right side of a production, and whose reduction to the nonterminal on the left side of the production represents one step along the reverse of a rightmost derivation.

A handle of a right – sentential form γ is a production A→β and a position of γ where the string β may be found and replaced by A to produce the previous right-sentential form in a rightmost derivation of γ. That is , if S =>αAw =>αβw,then A→β in the position following α is a handle of αβw.

39. What are kernel & non-kernel items?
Kernel items, whish include the initial item, S’→ .S, and all items whose dots are not at the left end.

Non-kernel items, which have their dots at the left end.

41. What are the benefits of intermediate code generation?
A Compiler for different machines can be created by attaching different back end to the existing front ends of each machine.
A Compiler for different source languages can be created by proving different front ends for corresponding source languages t existing back end.
A machine independent code optimizer can be applied to intermediate code in order to optimize the code generation.

44. Mention the functions that are used in backpatching.
· mklist(i) creates the new list. The index i is passed as an argument to this function where I is an index to the array of quadruple.
· merge_list(p1,p2) this function concatenates two lists pointed by p1 and p2. It returns the pointer to the concatenated list.
· backpatch(p,i) inserts i as target label for the statement pointed by pointer p.

47. Give the syntax-directed definition for if-else statement.
1. S → if E then S1

48. Mention the properties that a code generator should possess.

50. What is a flow graph?
A flow graph is a directed graph in which the flow control information is added to the basic blocks.

51. What is a DAG? Mention its applications.
Directed acyclic graph(DAG) is a useful data structure for implementing transformations on basic blocks.

DAG is used in

55. What is a basic block?
A basic block is a sequence of consecutive statements in which flow of control enters at the beginning and leaves at the end without halt or possibility of branching.

56. How would you represent the following equation using DAG?
a:=b*-c+b*-c

57. Mention the issues to be considered while applying the techniques for code optimization.

59. What do you mean by machine dependent and machine independent optimization?

60. What are the different data flow properties?

61. List the different storage allocation strategies.
The strategies are:

65. What is code motion?
Code motion is an optimization technique in which amount of code in a loop is decreased. This transformation is applicable to the expression that yields the same result independent of the number of times the loop is executed. Such an expression is placed before the loop.

66. What are the properties of optimizing compiler?
The source code should be such that it should produce minimum amount of target code.

There should not be any unreachable code.

Dead code should be completely removed from source language.

67. What are the various ways to pass a parameter in a function?

The hash function should result in uniform distribution of names in symbol table.

The hash function should be such that there will be minimum number of collisions. Collision is such a situation where hash function results in same location for storing the names. 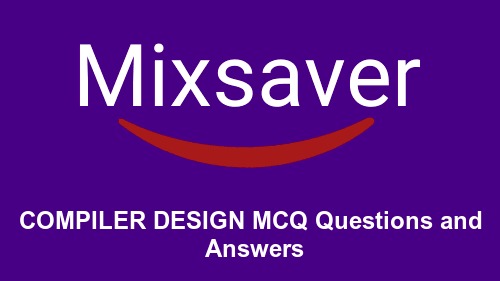